The Treaty of Trianon was the peace agreement held on the 4th of June, 1920, which formally ended World War I between most of the Allies and the Kingdom of Hungary. As a result, Hungary lost the 2/3 of its territory and people. Trianon is a much debated topic, but for now we collected what people outside of Hungary thought and said about the treaty.

Francesco Nitti, Prime Minister of Italy, September 1924: "No country was perished more viciously in Trianon than Hungary. But this country is dwelled by spiritually strong people, who won't be resigned to the demolition of their country. Hungary's dismembering is so dishonourable that no one takes responsibility for it. Everybody acts like they don't know about it, everybody is in coy silence. The reference to the right of nations' self-determination is only an untrue formula... they misused their victory in the most vicious way... There's no French, English or Italian who would accept the conditions forced to Hungary for their own nation..."

Herbert Henry Asquith, Prime Minister of the United Kingdom for 8 years, 1925: "This treaty is no work of statesmen, but the result of severe and fatal deceptions."

Vladimir Iljic Lenin: "The treaty was forced down their throat, but this is a usurious treaty, the treaty of murderers and butchers... unprecedented, predacious treaty... this is no treaty, these are conditions that scampsmen dictate with knives in their hands to unprotected victims."

Lloyd George, Prime Minister of the U.K., in his speech on the 7th of October, 1929:  "The whole documentation that we received from our allies at the peace talk, was deceitful and untrue. We came to a decision on false principles"

Arthur Neville Chamberlain, Prime Minister of the U.K.: "The result of the Treaty of Trianon in Europe is not peace, but the fear of another war." 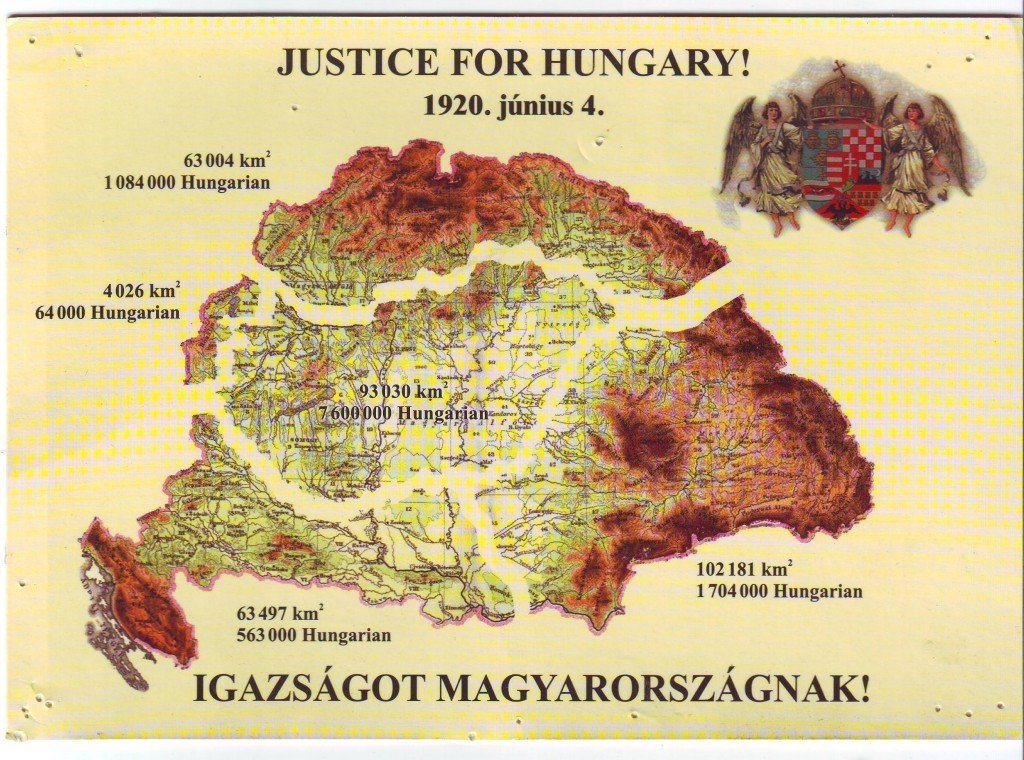 André Tardieu, Prime Minister of France for three cycles, in his book titled La paix: "The reason why there couldn't be a plebiscite held in Upper Hungary torn from the motherland is that in this case Czechoslovakia wouldn't have been formed due to the non-content of the population"

Father Andrej Hlinka, the leader of the biggest Slovakian party, the Slovakian Populist Party, 4th of June, 1925:  "Let the memory of the Hungarian homeland flicker in our spirits as we never suffered so much under the thousand years of Hungarian rule than under the six years of Czech rule."

Lord Viscount Rothermere, the publisher and editor in chief of Daily Mail, in his article 'Hungary's Place in the Sun' on the 21st of June, 1927: "I lost two sons in the war. They sacrificed their lives for noble ideas but not so that people would do so unjustly with a glorious nation. There won't be peace in Europe until the cunning and insensible Treaty of Trianon is revised."

Stanley Baldwin, Prime Minister of the U.K.: "Europe stopped existing on the day of the Treaty of Trianon."

Lord Newton, member of the House of Lords, U.K.: "Except for Romania, Czechoslovakia and Yugoslavia, whole Europe starts to realize the injustices of the Treaty of Trianon. It's high time to put Hungary's fate to rights wisely and peacefully."

Lord Sydeman, member of the House of Lords, U.K.: "I was shocked by the fact that the only party, who wasn't responsible for the World War, could have been treated so cruelly as the consequence of some kind of influence. Maybe the truth will once be revealed."

Edgar Wallace, English writer: "I am a firm believer of all actions that free Hungary from the unbearable burden of injustice that the country has to withstand."

Pozzi, French specialist, who was present at the discussions: "Pasic, Masaryk and Bratinau, but especially Wilson and Clemenceau played a game that will once be the shame of world history."

"The politicians deciding about Europe's fate knew as much about Hungary's geography and history as a 10-year-old pupil whose access into the upper school is denied ... Among them the president of the United States, Wilson, had the biggest prestige despite the fact that he frequently contradicted his own arguments, mixed Slovakians with Slovenians and showed clear signs of mental alienation. This sick Wilson was easily influenced by Masaryk..."

A Scandinavian reporter about Albert Apponyi's speech defending Hungary: "Apponyi talked with such rhetorical master-strokes, so lightly, elaborately and precisely in his two hour long speech in English, French and Italian that no one has ever done before in the world, that no parliament has ever heard. He defended his homeland with such touching words that many delegates couldn't mask their emotions..."

Winston Churcill, Prime Minister of the U.K., in the House of Commons: "Those who are not to reconsider the prejudice of Trianon are preparing a new European war."