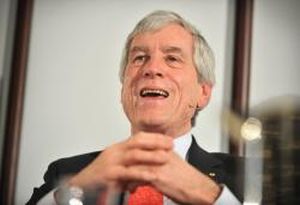 AAustralian Secret Intelligence Service 'ASIS' Director-General makes first ever public speech in its 60-year history. The venue for the speech is no accident: The Lowy Institute, a dodgy set up parading as an 'Australian think tank' which receives full media coverage and white-washing of its projected policies

Researchers are invited to connect the dots, and investigate the information given below, along with our prediction that the Olympic Games will be used for the usual culprits in order to bring to fruition the Orwellian policies put forward by the Lowy Institute, which serves the New World Order global power elite.

A Hungarian-Czech Jew with Israeli and Australian passports, co-founder of the huge shopping complexes throughout Australia "Westfields" which force out Australian small businesses and all but monopolizes the Australian diet and consumer trends. Westfields is one of the downfalls of Australia over the past 30 years. In 2010, Lowy was ranked #1 richest Australian on the BRW Rich 200 list.

Escaped the 9/11 terrorist events in New York by not showing up to work that day. Six weeks before 9/11 the WTC ownership was transferred into private hands for the first time in history: Lewis Eisenberg, head of the Port Authority, presided over the deal. It was awarded to Larry Silverstein and Frank Lowy.

Lowy fought in the Israeli Nakba as a member of the Golani brigade and, like Silverstein, miraculously steered clear of the WTC on that fateful Tuesday morning. All four men are intimately involved in the abhorrent Anti-Defamation League, an outfit that resembles the nazis it claims to oppose, by silencing anyone critical of Jewish Extremists and Zionism.

Lowy was appointed a Director of the Reserve Bank of Australia in 1995, and was reappointed in 2000 and 2003, concluding his term in 2005. The RBA is responsible for deciding Australia's monetary policies, as Australia's Central Bank since 1960.

In April 2003 on the occasion of the 50th anniversary of his arrival in Australia, Frank Lowy established the Lowy Institute for International Policy, an independent international policy think tank devoted to foreign affairs, and Australia's role in the world.

That is the official line however as an arch-Zionist and Israeli, in common with the situation in other western countries, the aim of Frank Lowy and his institute is the shaping and control of foreign policy to be in line with the objectives of Zionist billionaires.

For his donations of millions of dollars out of his billions of dollars wealth sucked from Australian consumers at the expense of small and medium-sized businesses, Frank Lowy was awarded "philanthropist" titles and has his face on an Australian postage stamp issued in 2008, on the eve of Australia Day.

With the above background (there is a lot more, the above is just a cursory summary), Australians will wonder why they don't know more about this man and his incredible influence over the lives of Australians, financially, politically and even regarding security.

Australia serves as an Anglo-American Zionist and Neo-Colonial outpost and a U.S.-Zionist military base in the Asia Pacific region, with a subservient regime based in Canberra which has no legitimacy in the eyes of the Original Australians.

In common with the other few white members of the so-called "International Community" (USA, Canada, Britain, and to some extent still New Zealand, and newly joined by the European Union) the foreign policy of these countries if firmly in Zionist hands.

Zionism, for those who don't know, is a political ideology akin to fascism and nazism, which places Jewish people above others in their status, and accords them a right to occupy Palestine by turning it into an artificial State of Israel, while kicking the Arabs, even though their own origins are almost always European, and having no ancestry in the Middle East.

Independent analysts believe that the Zionists, via their western "security and intelligence" outfits, will stage a false flag incident at the London Olympics, probably via a small nuclear bomb. Israel, is the only state known to possess suitcase nuclear bombs.

The Zionists are currently anxious to extend full control over the Middle East, and overthrow all governments which do not recognize the State of Israel. Libya was the first to fall after massive invasion last year, and now recognizes Israel. Syria and perhaps Iran are next in line for "regime change".

ASIS and the Lowy Institute

The Director-General of ASIS (who elected him, and who controls ASIS, the Australian people? No!) is the first in the entire 60-year history of the "Australian Secret Intelligence Service" to make a public speech, and he did so on the 19th July, at the Lowy Institute.

Justifying the many-fold budget increases each year for the past decade, and its role in "protecting Australians" in the "war on terror", ASIS is woefully unable to do so, since it has a total blind-spot for its Zionist terrorist paymasters.

The upcoming predicted terrorist false-flag event at the London Olympics will allow the Zionists and their New World Order, a hundred times the power and controls that the September 11 false flag events gave them since 2001.

11 years later, with the entire world tuning in to the Olympics, and with all British security and intelligence under the tight control of the Zionists, they will be able to pull off the explosion of a small nuclear bomb at the Olympics and destroy remaining freedoms.

The timing of the speech of the ASIS Director-General just ahead of the London Olympics, may not be accidental.

Expect new laws to be brought in at all borders, transportation restrictions, new restrictions on financial transactions, new endless lists of "enemies" (including all those who think for themselves, conduct research and publish it as we are doing), and even the assumed right to assassinate whoever they want, whenever and however they want.

The big question is whether those who are not entirely governed by this mob, such as Russia, China, and much of South America, will tolerate this new declaration of war on the people of the world as well as on the citizens of the west by governments that are merely voted in by voters who then have no control over policies, nor accountability of officials, or recourse to legal protections.